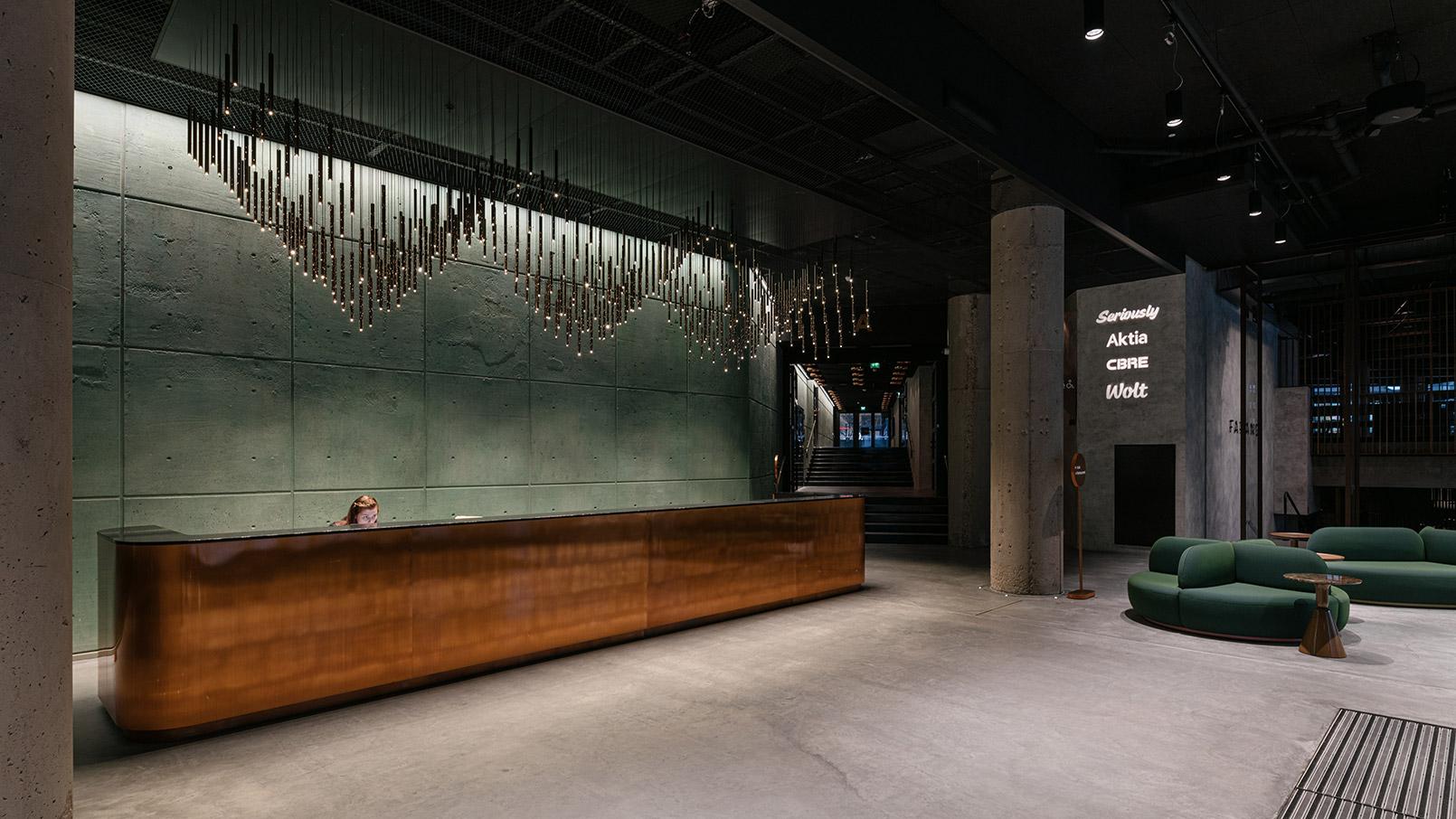 Sponda’s property Arkadia 6 in Helsinki city center was completely renovated in 2020. The property went through a thorough facelift through a renewed brand image and an impressive main lobby. Likewise the tenants’ facilities will be renovated to match the plans and the spirit of the time. We were involved in the design of the lobby areas and several tenant spaces. On top of these we also designed the signage in the public spaces and a concept for the facade to increase visibility for both the property and the tenants within. 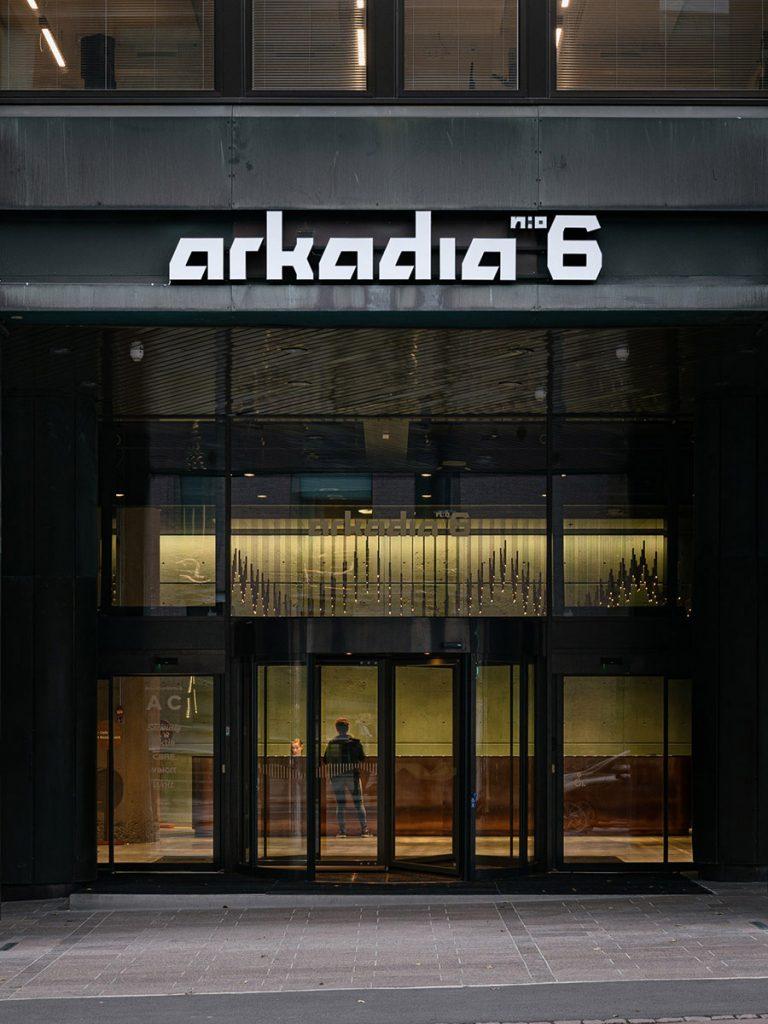 The city center property’s lobby used to be outside space. 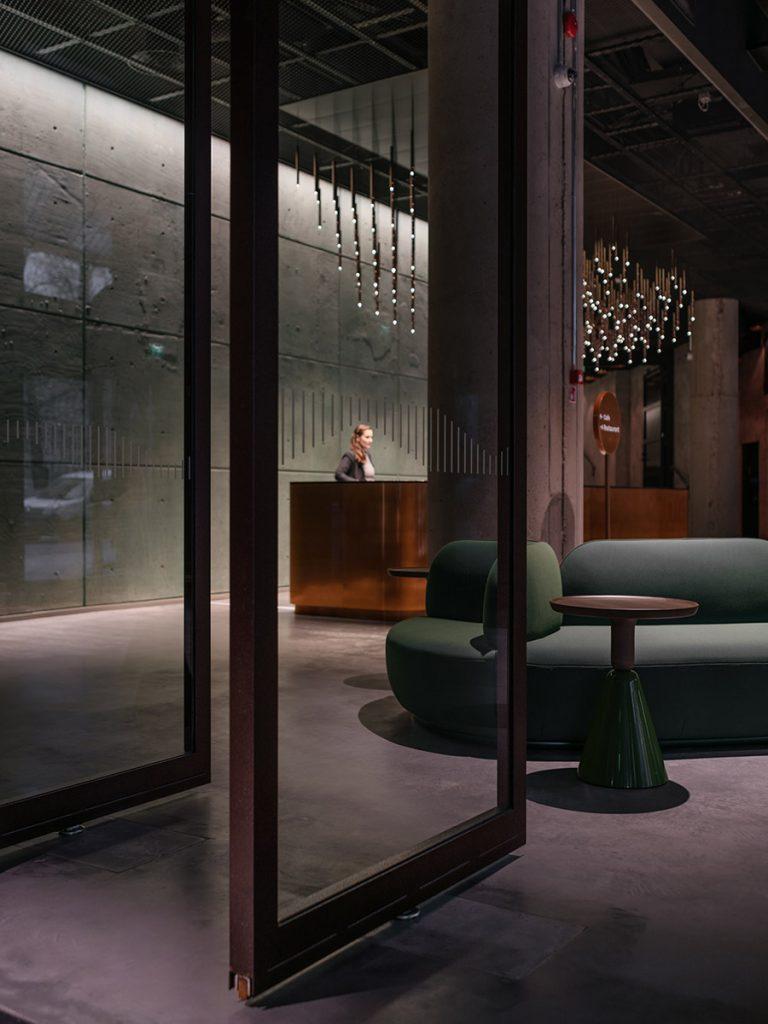 We wanted to express and remember the history of the lobby as an outdoor space. It was transformed into a plaza for the office building, in which its employees, customers and passersby can cross paths.  A connection between the café and the restaurant was created through the lobby. Five meter high pivot doors on both sides of the lobby lead to the restaurant and the café. When the doors are open, the spaice remains cohesive and creates an impression of a breeze through the plaza.

Architectural materials and materials typically used on facades were chosen for the indoor spaces to generate an impact both impressive and elegant.

The lobby is dominated visually by an installation of lights which emphasizes the reception desk and also acts as a guiding element.  The concept of the Arkadia 6 building includes a reception with service which we wanted to emphasize in a subtle way. The lighting was used to create a variety of moods for different times of day, seasons and different events held in the space. General lighting is low-key and highlights the main elements of the space, i.e. the concrete surface of the rear wall and the reception desk. 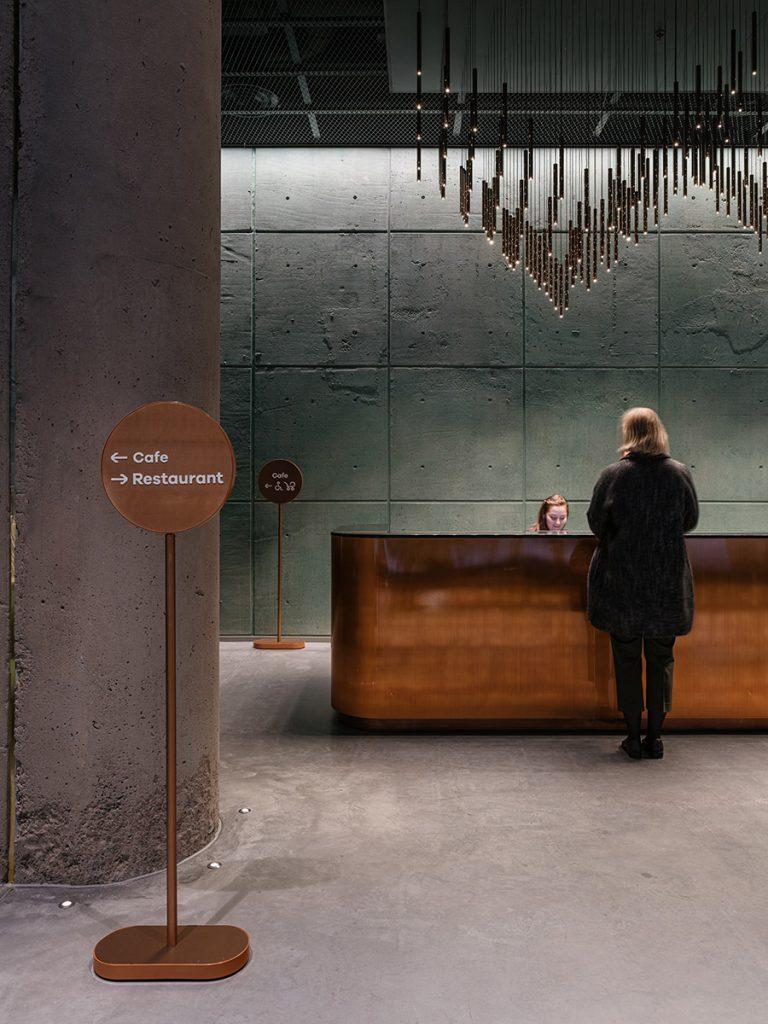 The visually dominating lighting installation emphasizes the reception desks and acts as a guiding element.

The copper surface of the reception desk adds contrast to the turquoise concretee wall surface that dominates the entire lobby. The idea behind the turquoise wall surface was to show the patina which forms on copper outdoors. The wall has been treated with a painting technique that lets the concrete surface show through several translucent layers. This gave the surface the typical liveliness and variance found on patinated copper.

To create a cohesive atmosphere and a finished impression copper was used also on the signage in the lobby and stairwells. We designed the floor numbers by continuing the visual style of the building’s logo. Underground parking lots on two floors and the waste room also needed comprehensive signage to enable smooth logistics as well as circulation by car or bicycle. The basement floors also got signage so that the parking lots, elevators and other facilities could be easily found and accessed from all around the building.

In designing the facade we had our say in the placement of illuminated logos, wall-mounted signs and plants. We helped devise tenant guidelines for how different brands can build window displays that are suitable for the Arkadia 6 property. 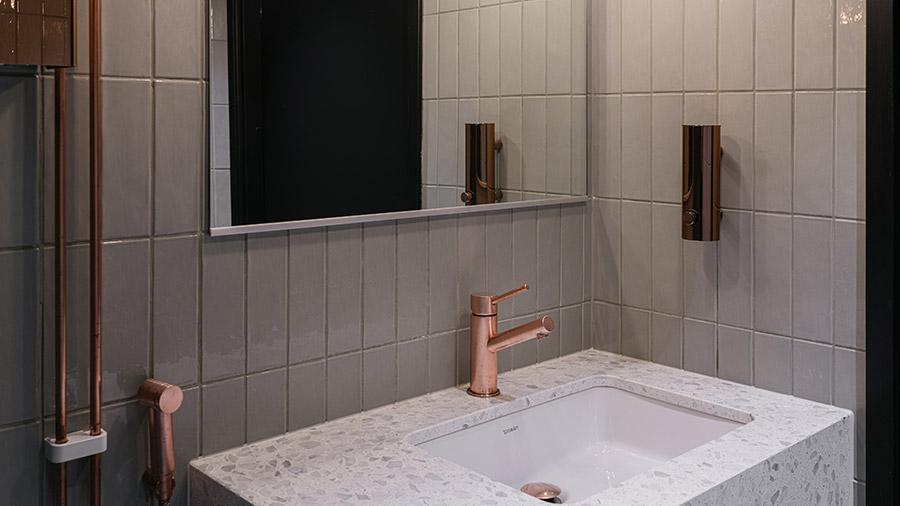 The same look and feel is continued in the toilets. 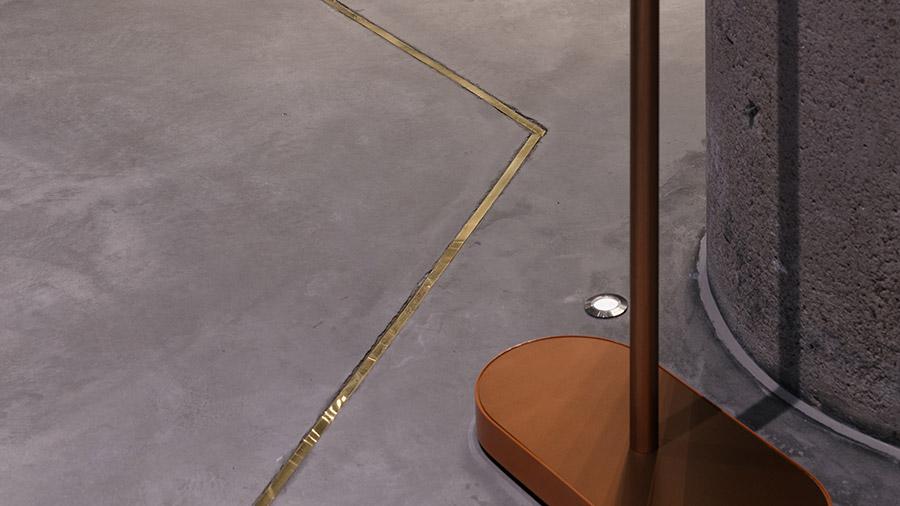 Attention to detail can be seen even in the seams of the floor. 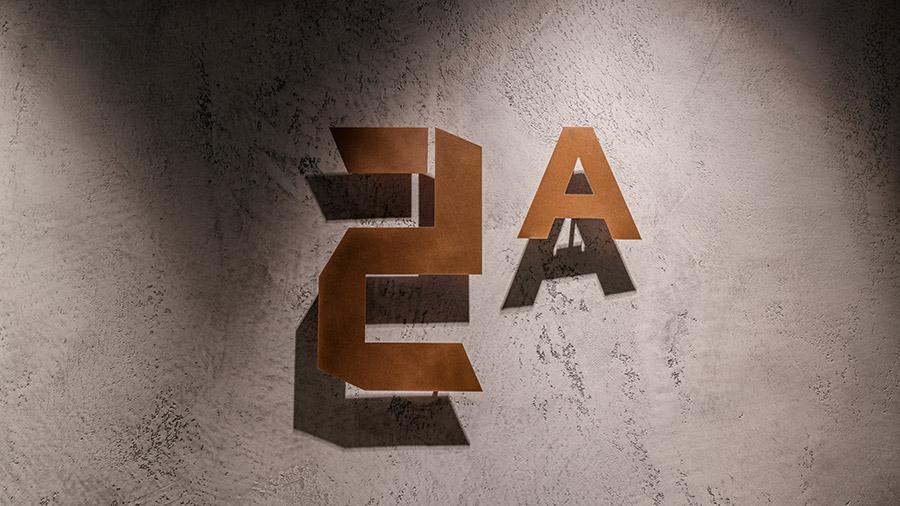 The copper used in signage makes for a finished impression. 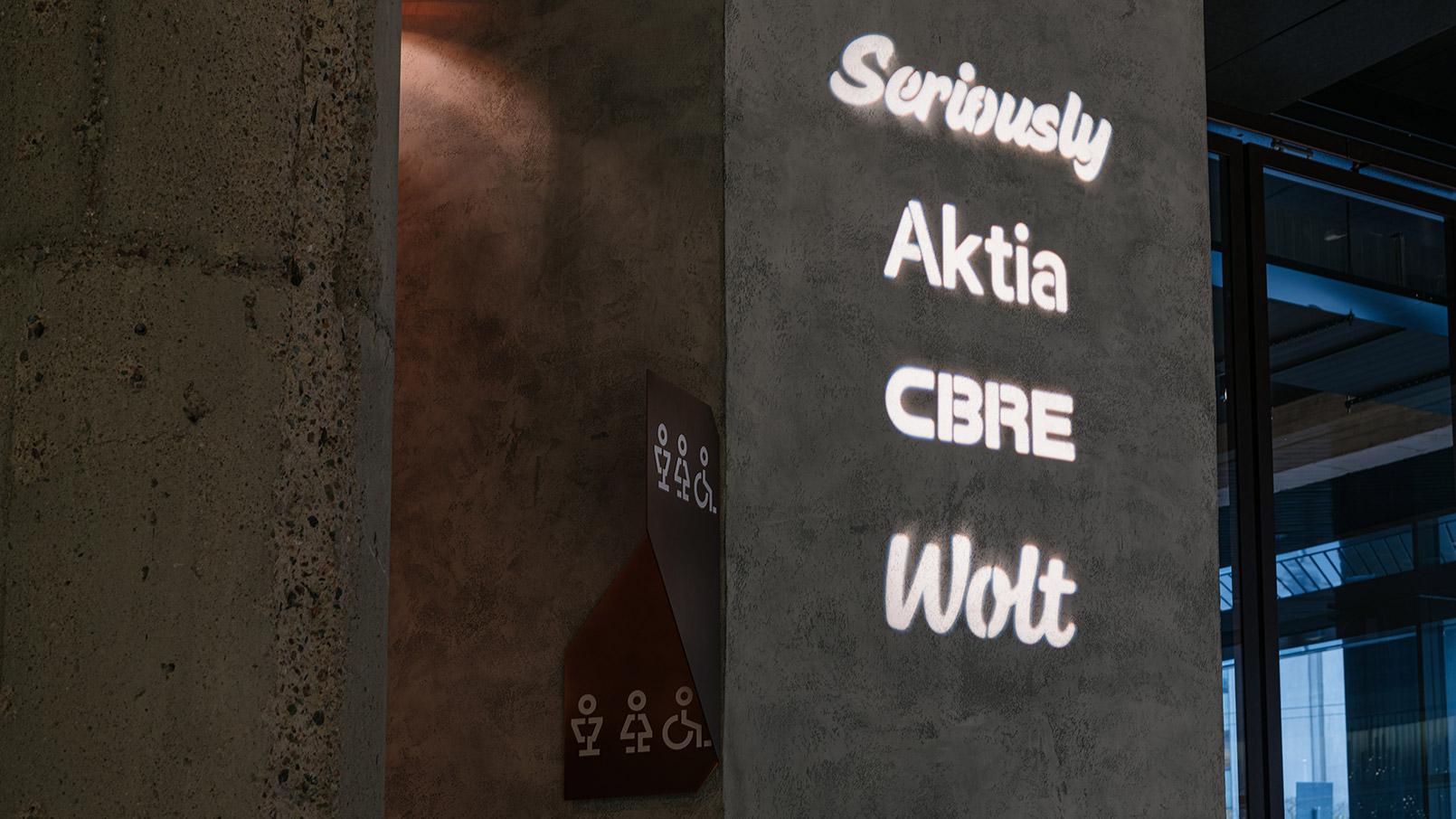 The tenants’ logos are reflected on the concrete surface using gobo lights.

The rugged, modern and architectural look of Arkadia 6 clarified the property’s cohesiveness and made the office building a desirable destination in the business premise market.