Trooli is a four-building office block located in Kalasatama, Helsinki, right next to the Teurastamo venue and Redi shopping centre. The inner yard has parking spaces, a terrace and passageways to the different buildings. The trendy, red-brick office block is a perfect match in the developing neighbourhood that, in the near future, will offer housing and services to up to 25,000 people. Trooli is located at the intersection of a developing, vibrant business district by the sea and the historic neighbourhood of Tukkutori – hence its name Trooli (Finnish for “trawl”). To make Trooli easy to find, the modern logo and signage are visible from a distance. When visitors enter the space, they first see the premium lobby and the meeting and office spaces that make subtle references to the artisanal history of the area. 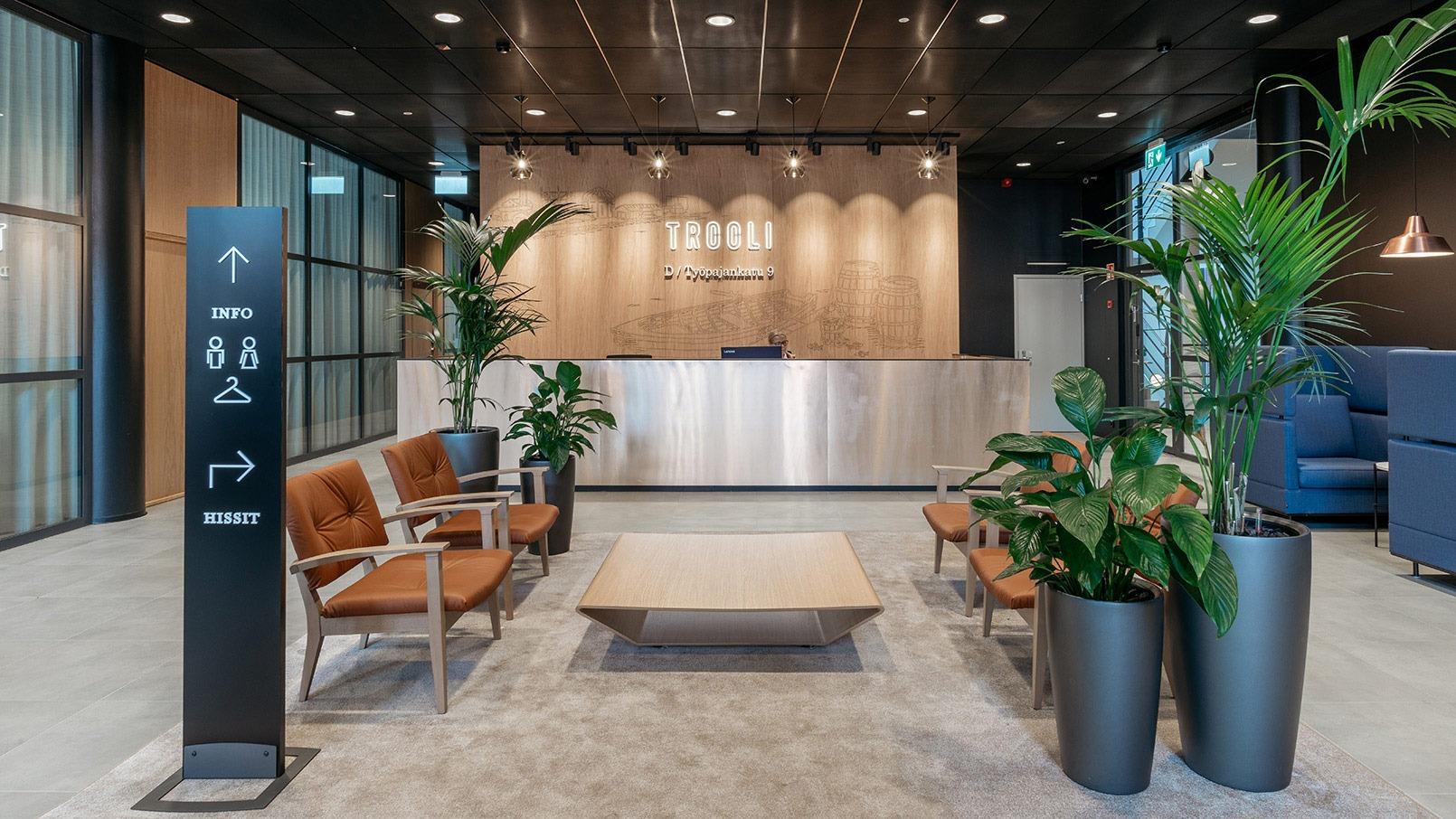 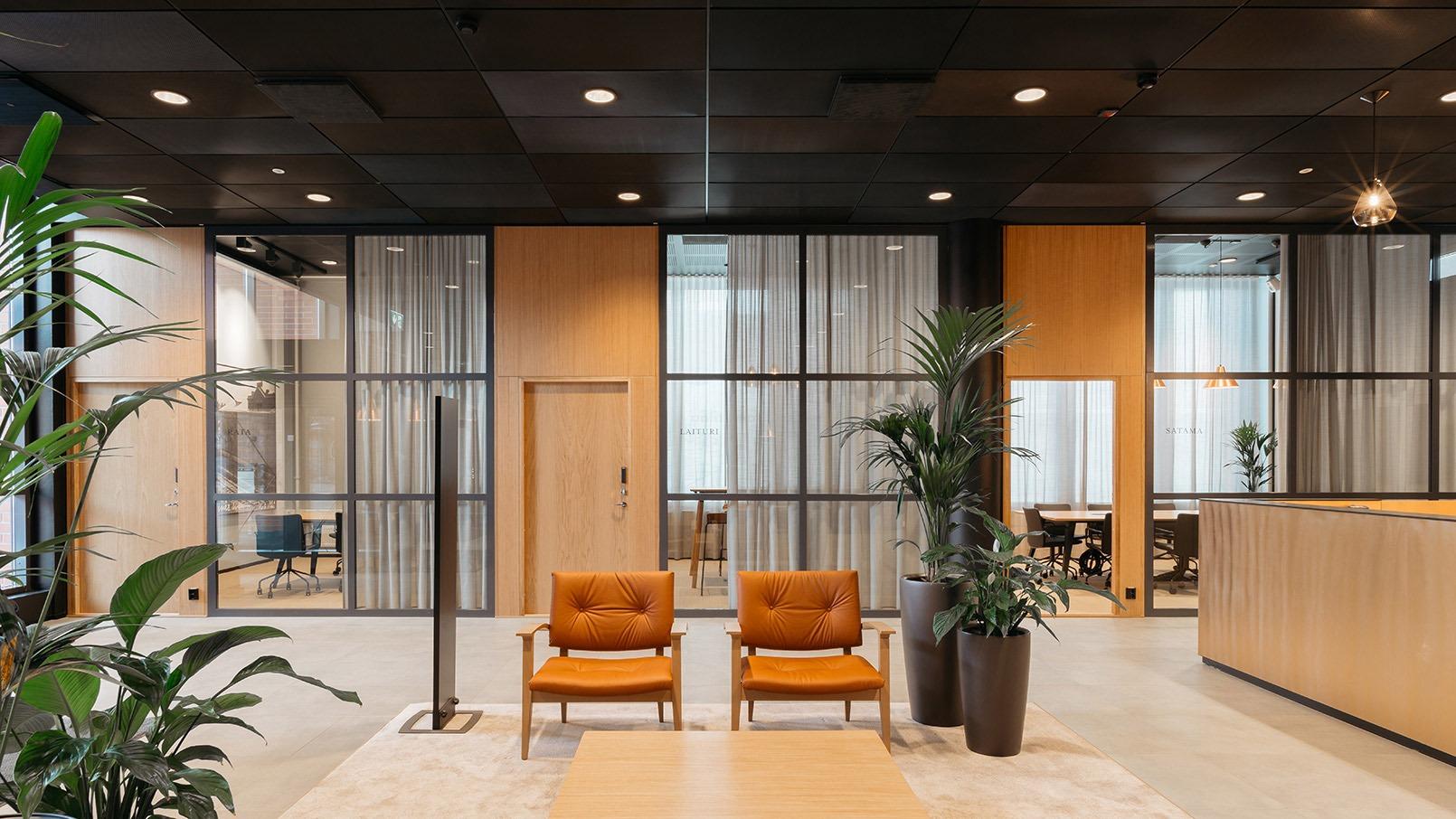 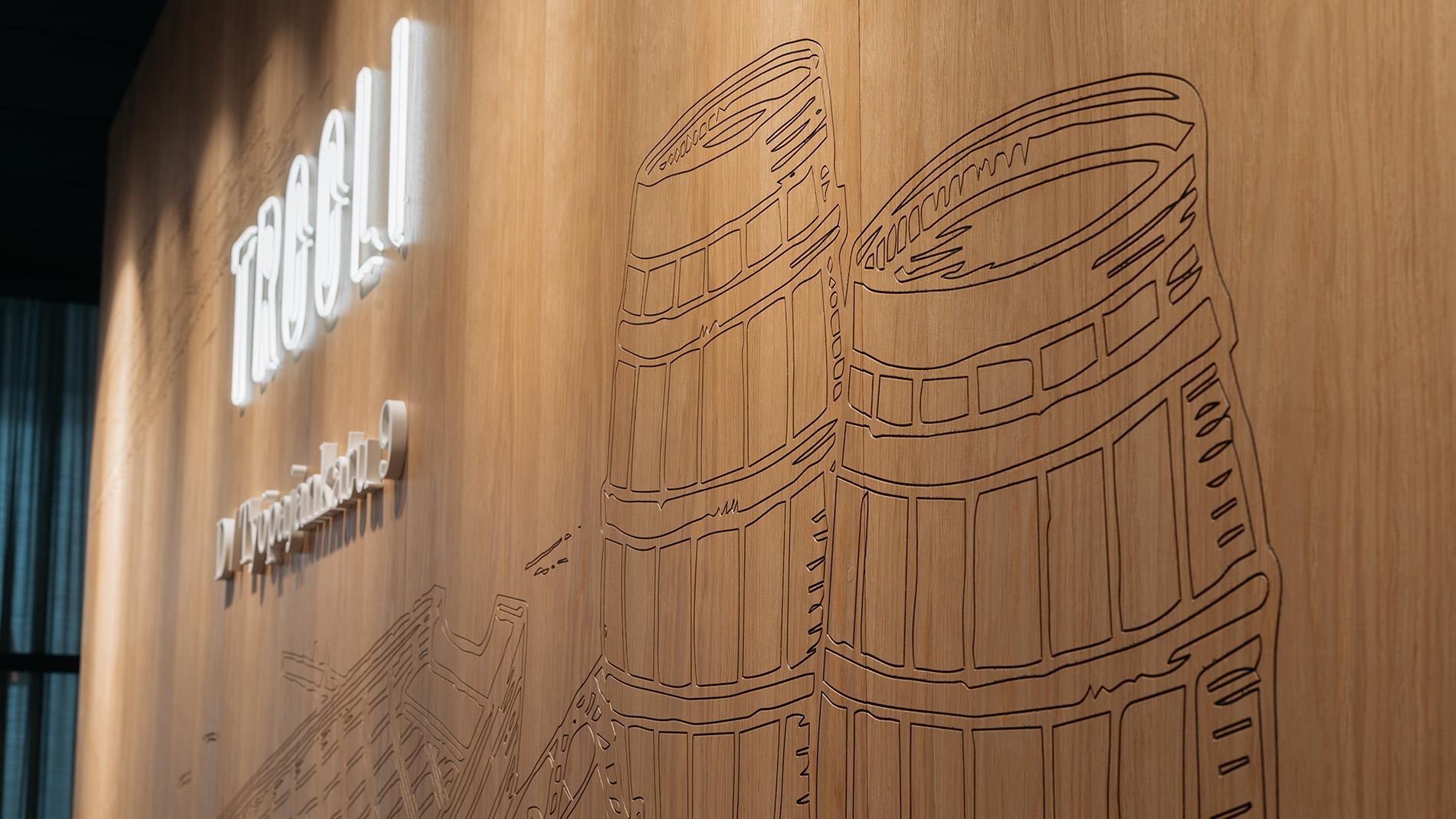 Trooli – where the big fish swim

The roots of this modernised office block date back to the 19th century. Back then, the area around Trooli was located at the edge of the city, making it ideal for sites with a high fire risk, such as factories and workshops. In the 20th century, the area developed into a busy port for large steamships and small wooden boats. The office block was built in the early 2000s.

The renewal covered the property at Lautatarhankatu 10, where the lease of the main tenant was about to expire. The building needed a new purpose. During the project, the previously single-tenant property was converted into an attractive, vibrant multi-user venue. Rune & Berg was responsible for renewing the lobby and the meeting and office spaces, and for designing a new visual look for Trooli. The project included both spatial and graphic design. 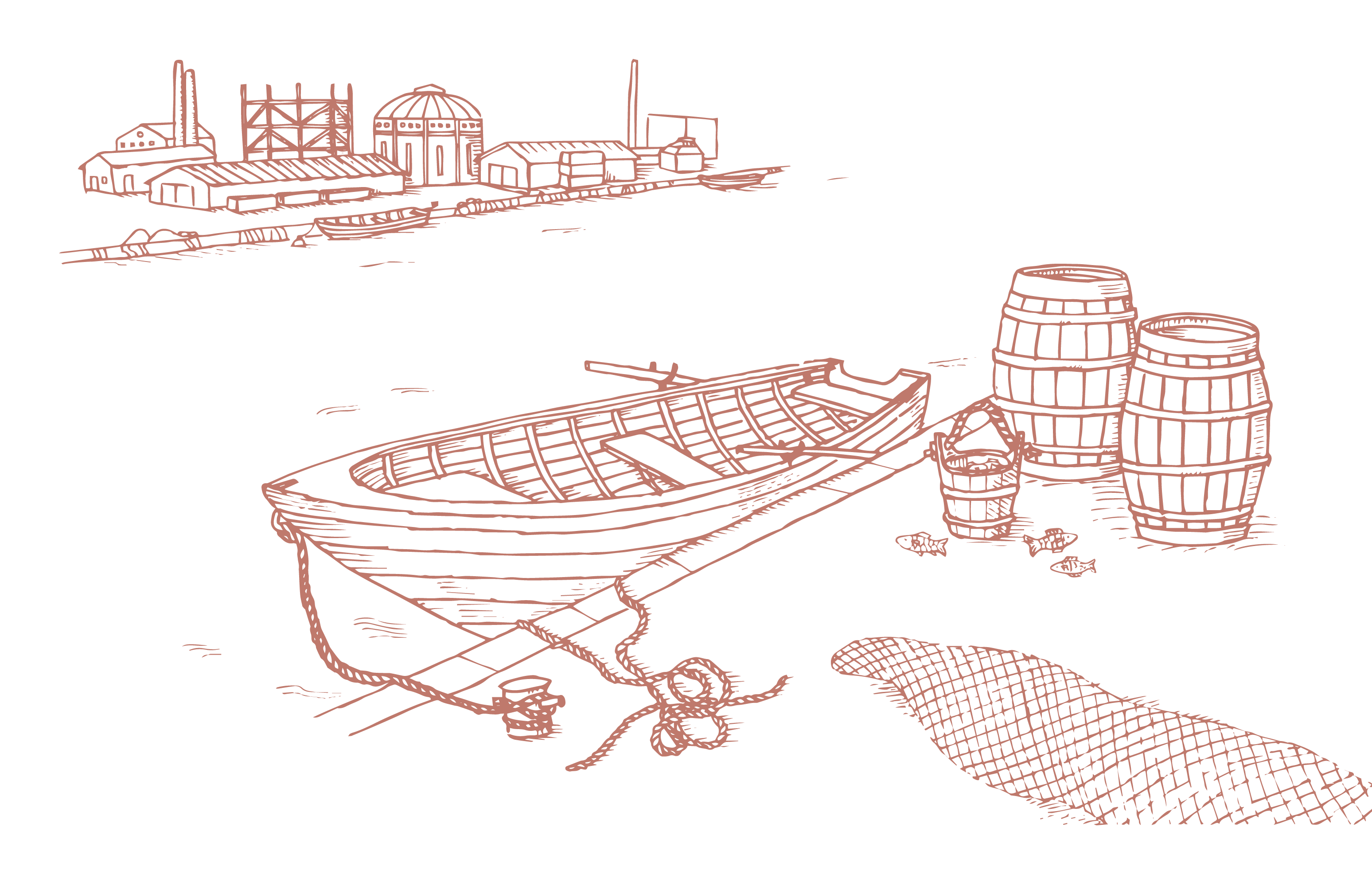 The new identity and visual concept of the building make the building recognisable and leave a positive impression on the companies and their visitors. The renewal covered the design of the lobby, meeting and office spaces, and the visual look and signage.

The entrance lobby is a prestigious, welcoming and appealing meeting place where the tenant companies can receive their guests with pride. Stepping into Trooli, the visitor gets the impression of a classy hotel or a restaurant rather than that of an office building. The same, warm atmosphere is present in the office and meeting rooms.

The objective in designing the visual appearance of Trooli was to make the block stand out as a high-quality, trendy business venue. The visuals are a combination of traditional crafts elements, classic quality and fresh trends. All the graphic elements, from old photographs to signs and brochures, reflect the block’s rich and eventful history. As a unique detail, there is a hand-drawn, engraved wooden piece of art behind the reception desk with boats, barrels and nets that reflect the history of the area as a port.

The one-of-a-kind, easy-to-approach appearance combined with modern office premises makes the building more recognisable and helps the owner achieve their goal of a profitable multi-user building. New tenants at Trooli include the co-working provider UMA Workspace. 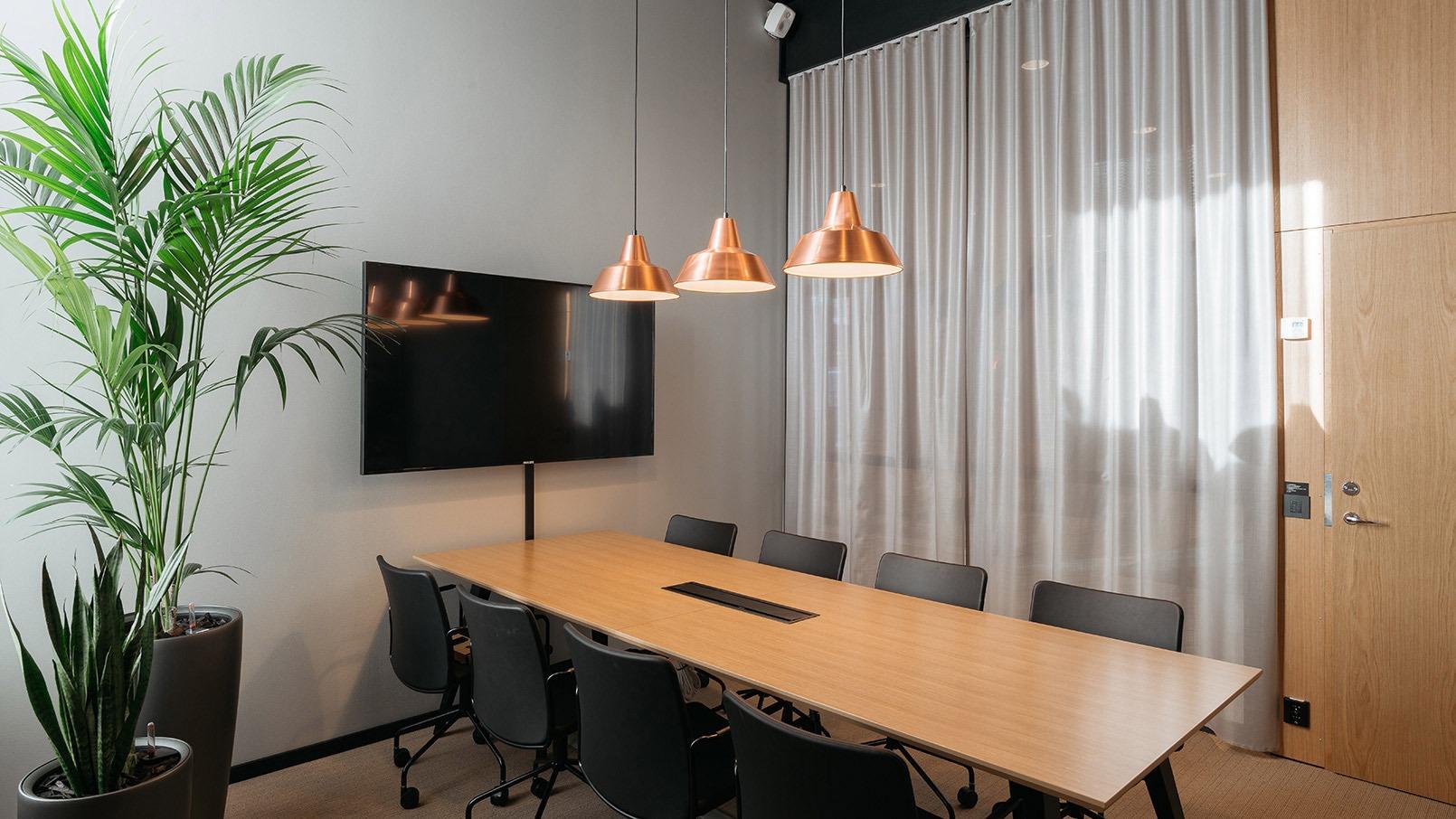 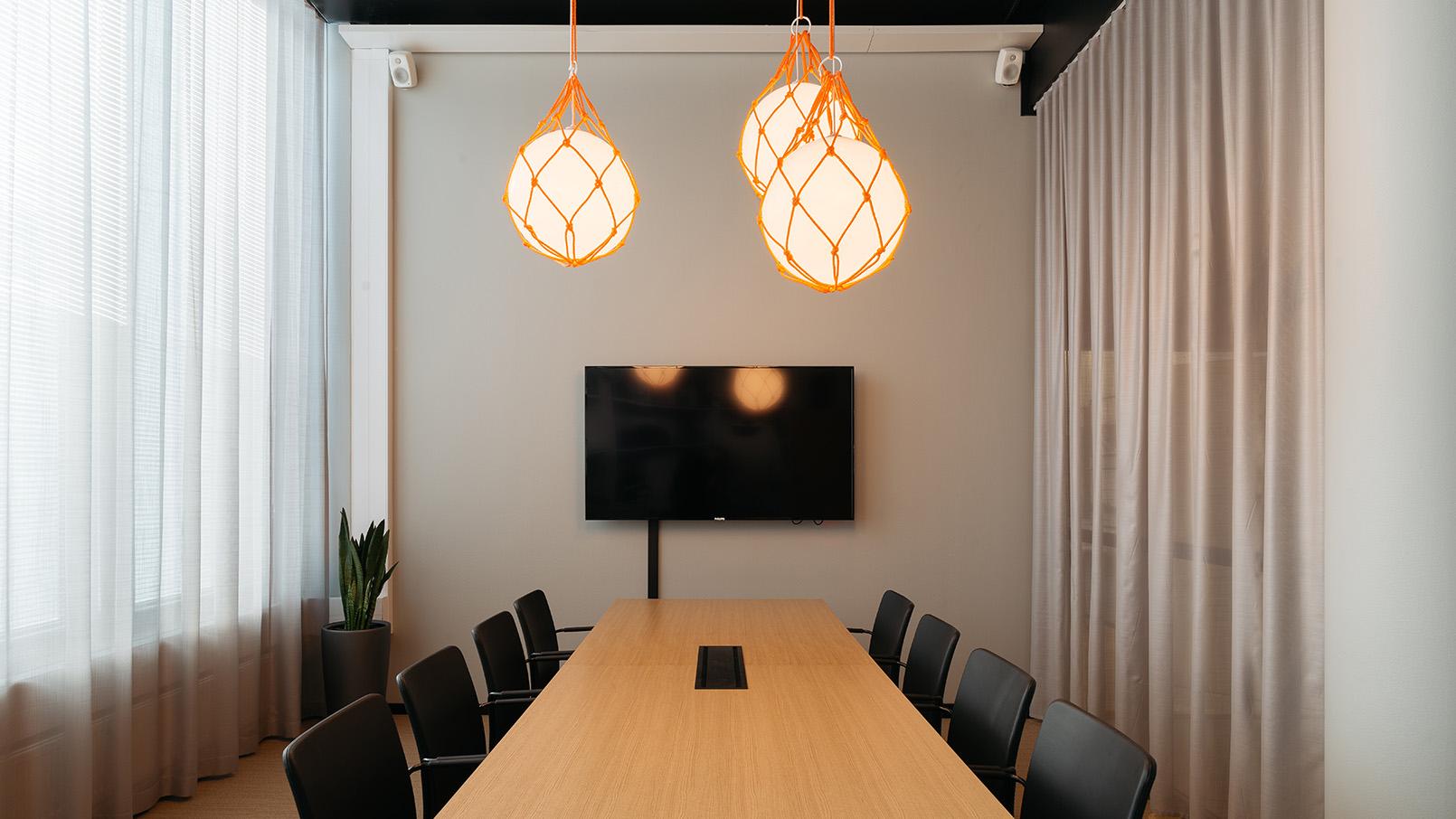 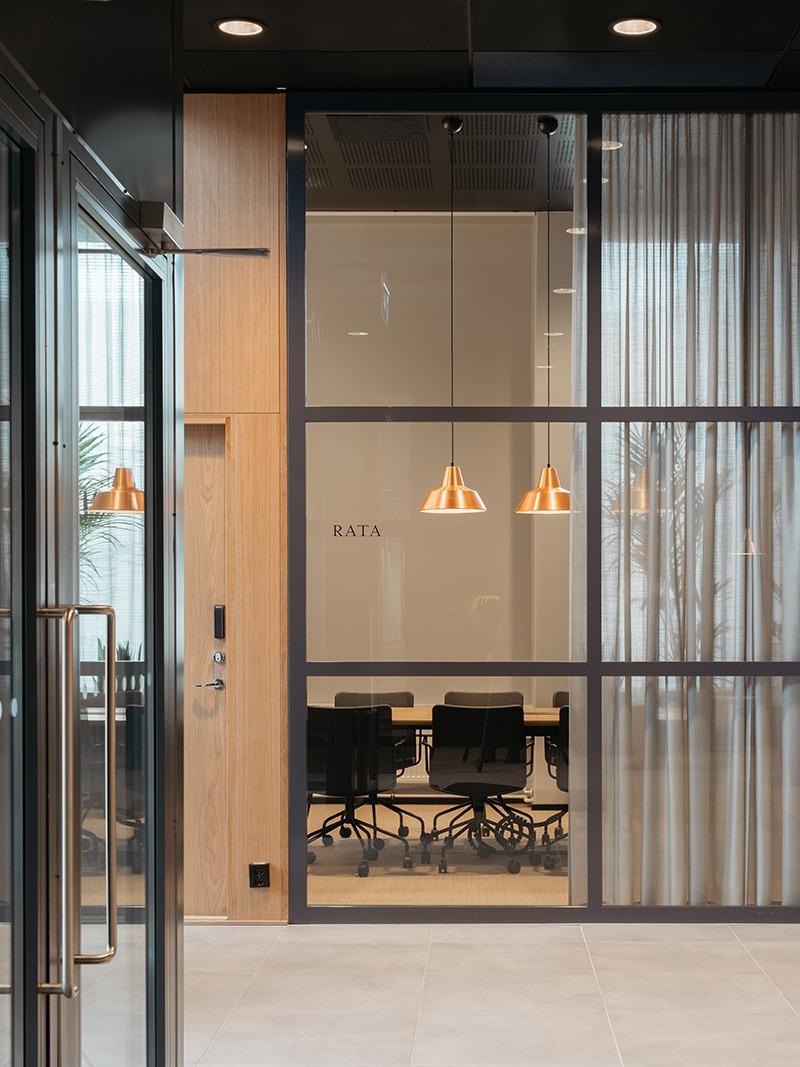 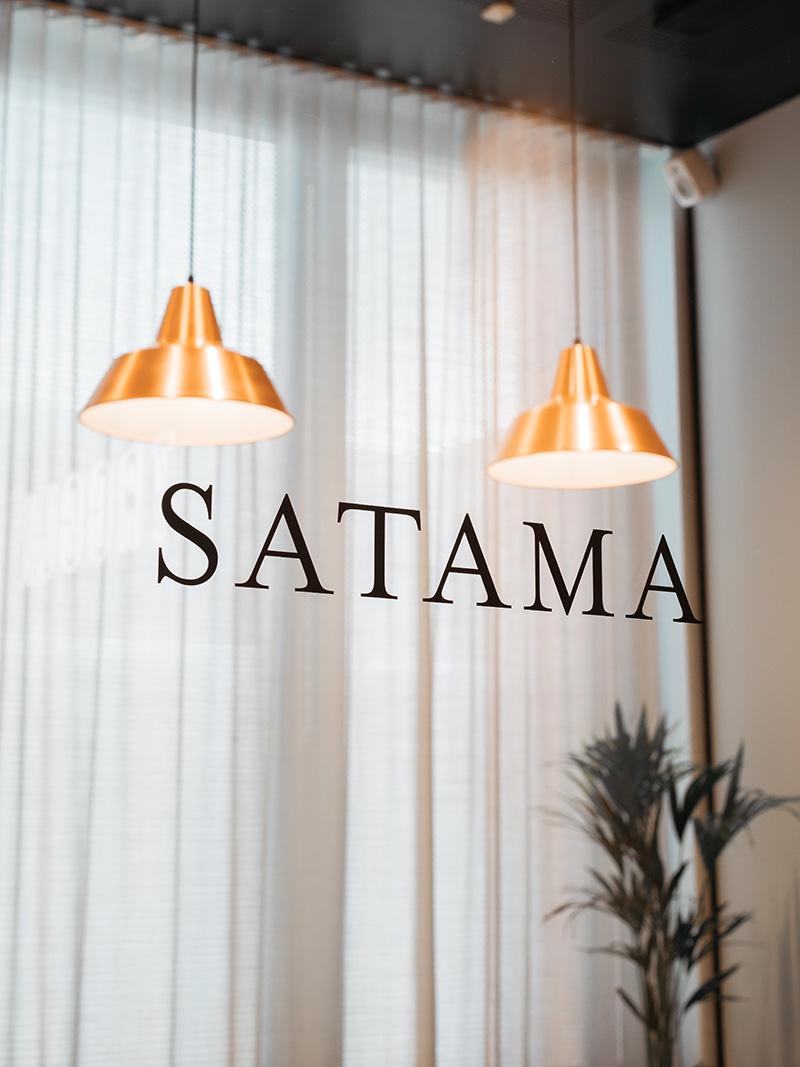 The facelift of the facade was started with sketches of the overall look. 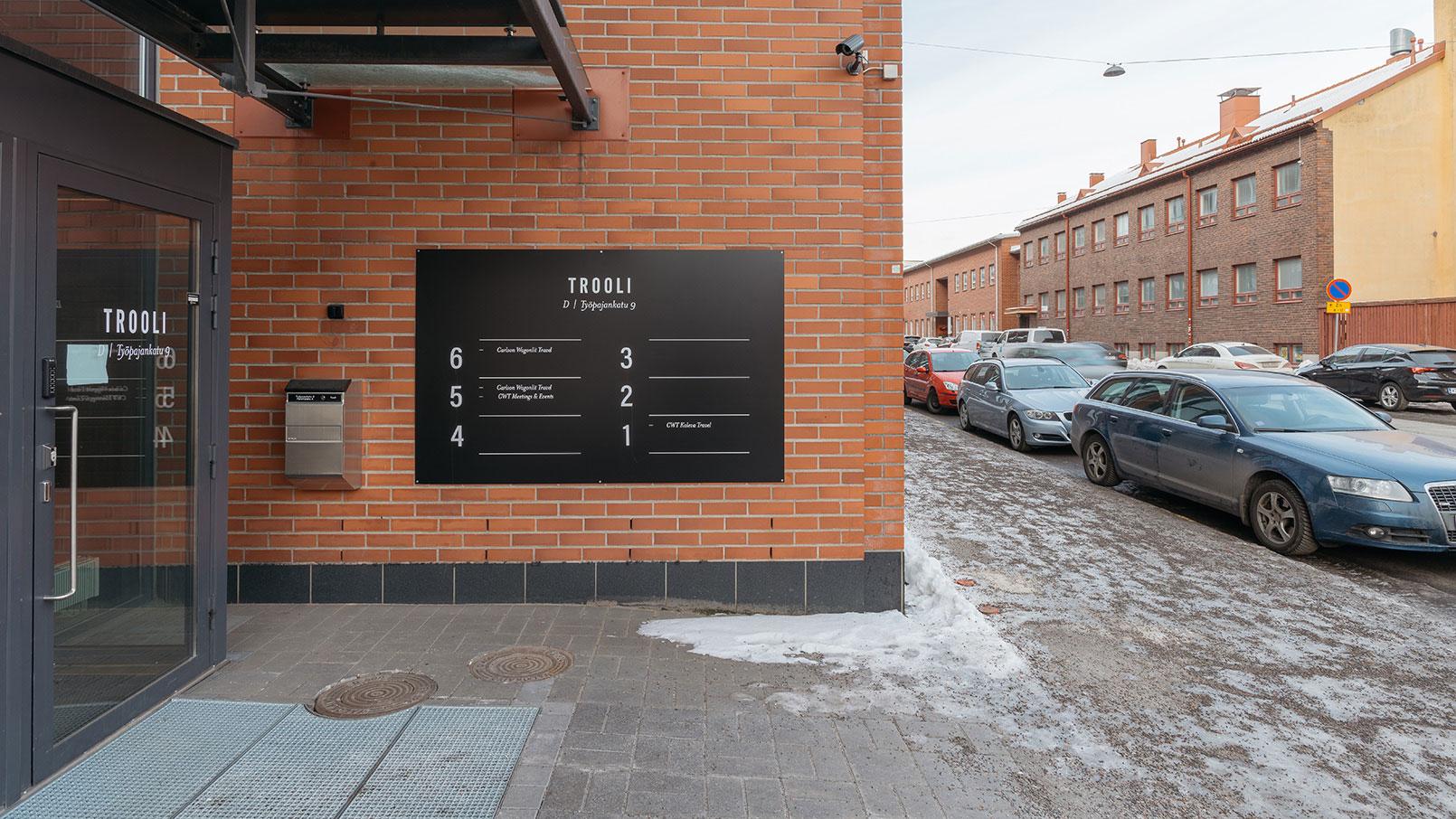 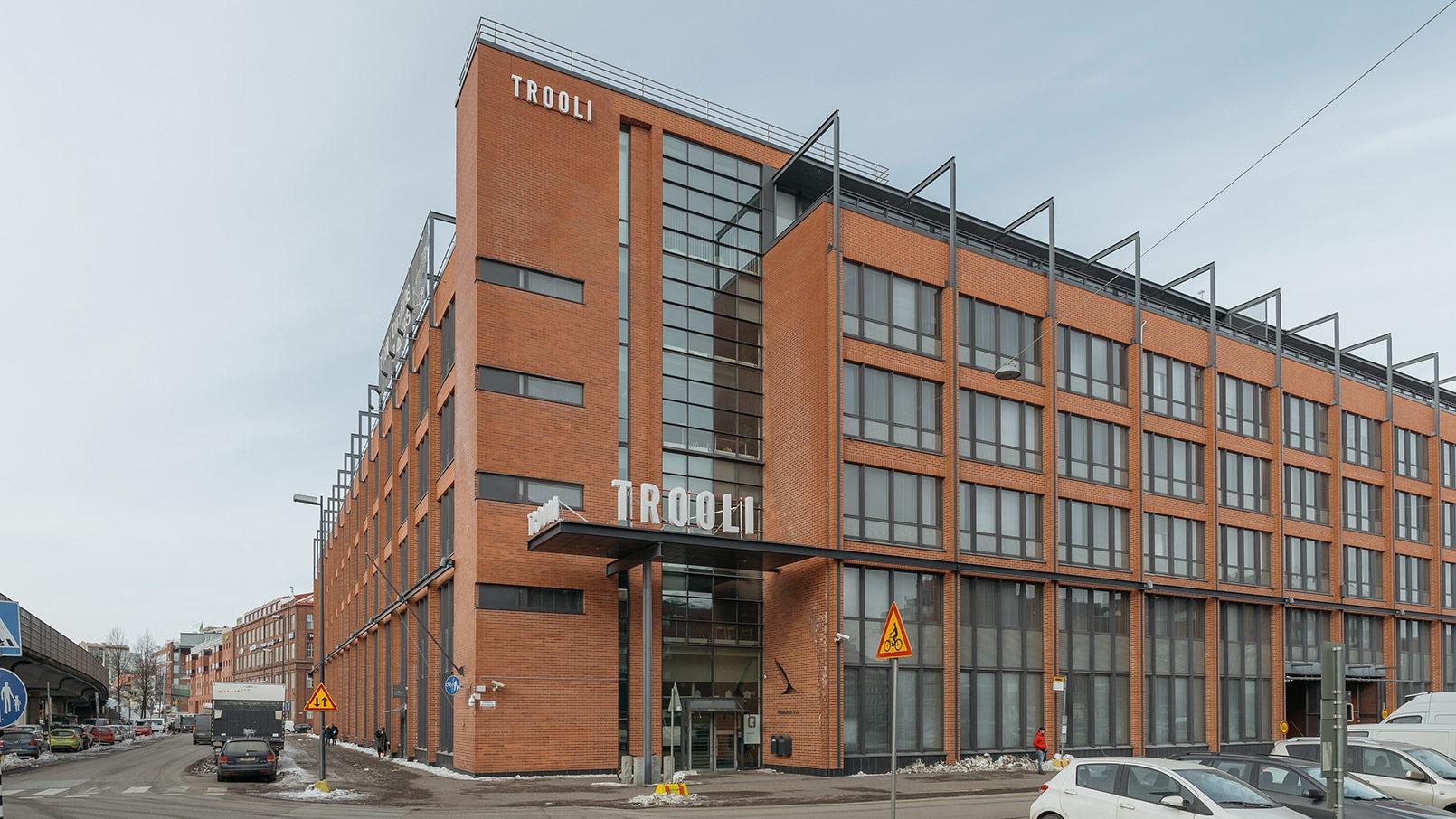 Read the article on UMA Teurastamo that operates in Trooli (in Finnish).

Get familiar with other similar projects 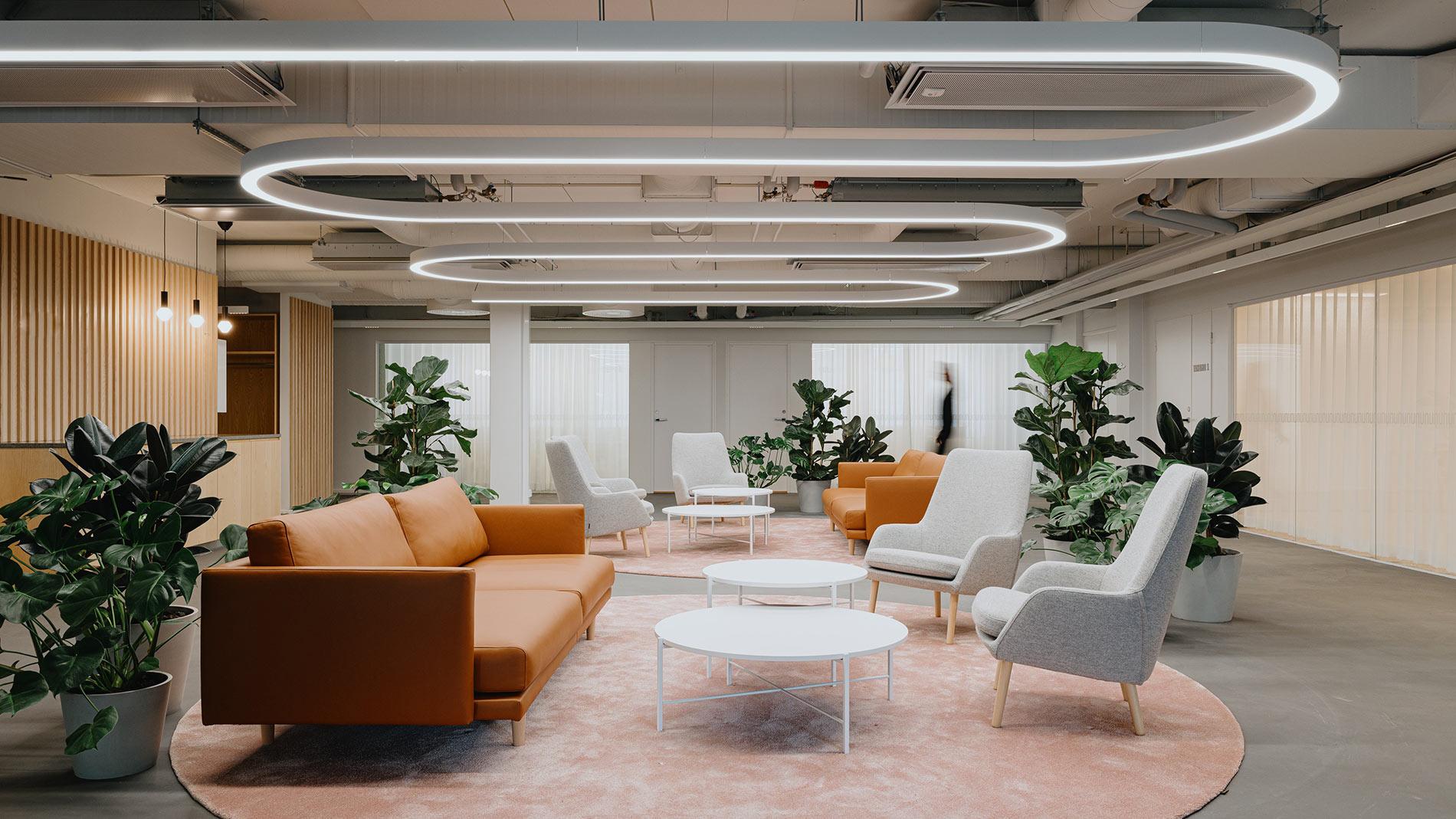 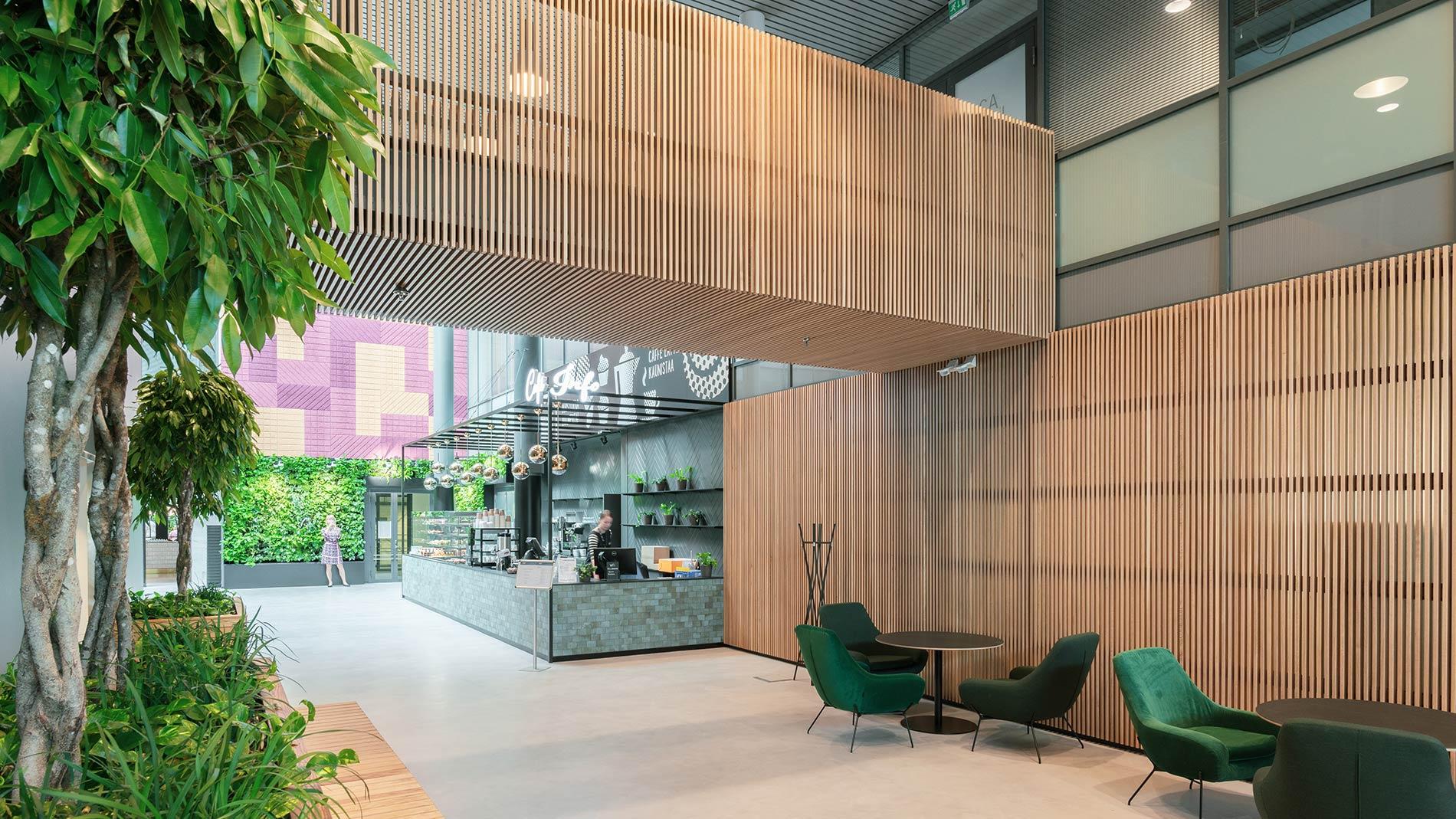